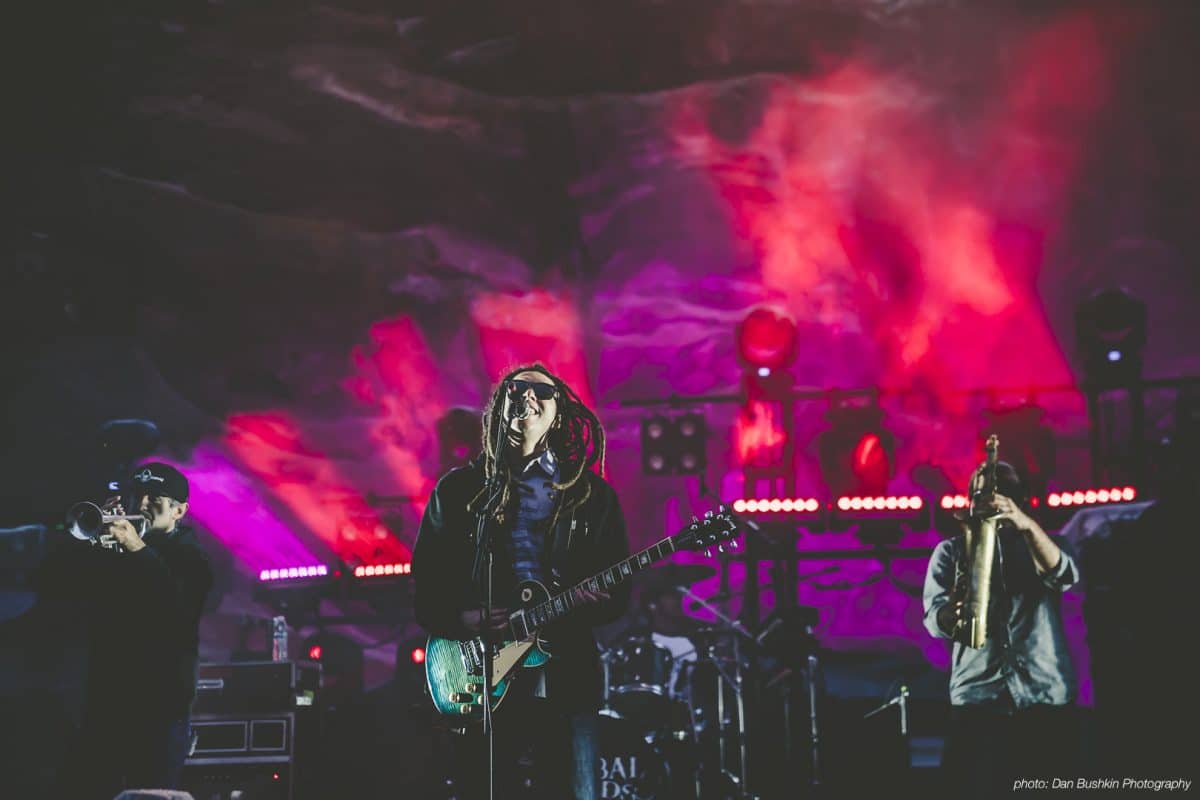 San Diego’s Tribal Seeds is one of the longest tenured bands of the progressive roots scene, with this longevity speaking to the top shelf quality of their music. They boast a distinctive, modern essence, thanks in large part to the instantly recognizable singing of guitarist Steve Jacobo. Jacobo has one of the most memorable, salient voices in American reggae music, with a clear resemblance to the legendary David Hinds of Steel Pulse.

While the instrumentation is tight, it’s really the vocals that drive this song. Jacobo has a knack for writing choruses that get stuck in your head, and his patois-influenced delivery is especially appealing to lovers of classic Jamaican reggae.

Tribal Seeds’ music typically speaks to one of three common themes: love songs (In Your Eyes,  Night and Day), homages to ganja (Herb Stock, The Garden) and rebellious anti-establishment anthems (Run the Show, Bloodclot). “Aroma,” the lead track on their new Roots Party EP, encompasses the latter two motifs, while weaving in an undercurrent of religious retrospect.

This makes for an interesting juxtaposition between the music and lyrics. The tone and general vibe of the sound is smooth, easy roots reggae; but don’t be fooled by Jacobo’s relaxed vocal style. While the chorus rejoices in the love of the herb, the verses of the song express feisty sentiments toward evil aggressors, be it in the form of corporate greed, atheism, terrorism and/or warmongers.

Multidimensional songs like this should not be taken for granted – this is the work of a seasoned composer with a lot to say, and who clearly strives to find an interesting way to deliver his message.

To commemorate the release of Roots Party, Steve Jacobo was kind enough to answer a few questions for Rootfire.

Rootfire: Can you tell us a little bit about when and how you were introduced to reggae music?

Steve Jacobo: I grew up on reggae from my parents. They would always play Bob Marley, Peter Tosh, etc. in the house when my brother and I were kids.

RF: At what age were you drawn to music as a youth? Do you have a mentor that you credit with teaching you a lot about playing music, or reggae, or both?

SJ: Since birth, really. I think my dad was the one who always played reggae around us and he’s the one who got us our first instruments. We became kind of natural at playing reggae once we figured out the basics of the guitar and keyboard.

RF: What artists do you draw from as influences, both within the genre and outside the genre? Who are your favorite current musicians?

SJ: The biggest influences are still from the old school reggae legends that we grew up on.

Nowadays, I like bands like The Expanders, The Skints, bands who keep the old school sound alive with their own style. But I enjoy a lot of types of music, anything from classical to electronic, anything that sounds good.

RF: You’ve been growing dreadlocks for as long as I can remember, and you sometimes compose lyrics and sing in patois. Do you have any Jamaican roots, or did this just come naturally as someone who has delved deeply into reggae music for a long time? To what extent do you identify with Rasta consciousness?

SJ: It just kind of came naturally from growing up on reggae. I’ve always liked the deep, mystical, wise chanting style of roots music, and I try to relay that through our music. I’ve studied Rastafarianism – I’ve tried to make sense of it all because I wanted to believe, and still do. But just like with anything regarding religions, I was left with more questions than answers. But I believe there’s truth in it, just like any other religion, and I’d love for Selassie to return and straight conquer this tyrannical system we live under, but I can’t say for certain that it’ll happen. I can’t say I believe in any one faith wholeheartedly, the universe is too big.

RF: How has your songwriting evolved over the years?  What about the production aspect? Any particular favorites you’ve composed?

SJ: Well, I try to pay more attention to the wording and melodies in my writing now. Most of the time I’ll come up with an idea and record it on my phone so I don’t forget it, then I’ll listen to all the stuff I recorded and see which ones stand out to me. I do most of my vocal recording on tour on the tour bus. I just bring my recording equipment on the road. And most of the other parts are done from everyone else’s computers and home studios. We still track drums in a real studio, though. I’ve been happy with all the new stuff so far and want to keep this vibe going.

RF: What are your ultimate career aspirations with your music? Do you hope to be selling out Qualcomm/SDCCU Stadium one day or have you reached your ultimate goal already by earning a living making music?

SJ: I just hope to keep making music that myself and our fans can enjoy. I’m content and feel blessed to be able to make a living off it, but I’d still like to keep moving forward, and some more international shows would be cool.

RF: What do you do for fun when you’re not working?

RF: If you weren’t a musician, what do you think you’d be doing for a living?

SJ: I have no idea honestly.

RF: This winter you are hitting the road with your SoCal bredren The Expanders, along with The Original Wailers, which features Al Anderson who toured with Bob Marley. Have you met Al in the past?  Are you looking forward to spending time with Al on the road? Do you think you can still learn a thing or two?

Of course, we never stop learning and I look forward to checking out their sets. It’s an honor to tour with people I look up to and grew up on.

What are your five “desert island discs,” those albums that you would bring with you if you were stuck on a desert island the rest of your life?

That’s hard, but I’d like to throw some classical in there, some like hymns music where they chant inside of the great pyramid of Egypt, stuff like that. Something I can meditate to.

← Rising Above the Storm with Stick Figure

Unity in Music: Fortunate Youth →
wpDiscuz
We use cookies to ensure that we give you the best experience on our website. If you continue to use this site we will assume that you are happy with it.Ok