Over the last half of 2020, North Carolina’s Signal Fire released five singles, all of which were super chill. What’s behind the trend of laid back tunes? Has the birth of head-honcho, singer/guitarist Sean Gregory’s son immersed him in an extended sense of euphoria? Has his muse been dosed with wine and Xanax?

Whatever the case, Gregory has pivoted and come out swinging in 2021 with Signal Fire’s latest single, “False Reality.” Officially releasing tomorrow but premiering here on Rootfire today, it is a collaboration with Reggie Froom, singer and bandleader of Jensen Beach, Florida band The Ellameno Beat. The duo has crafted a heavy-hitter both musically and lyrically, a song with a rocking groove that expresses disdain for the bitter bipartisan groupthink fostered by many Trump supporters that has perpetuated lies and fomented fear and hatred. 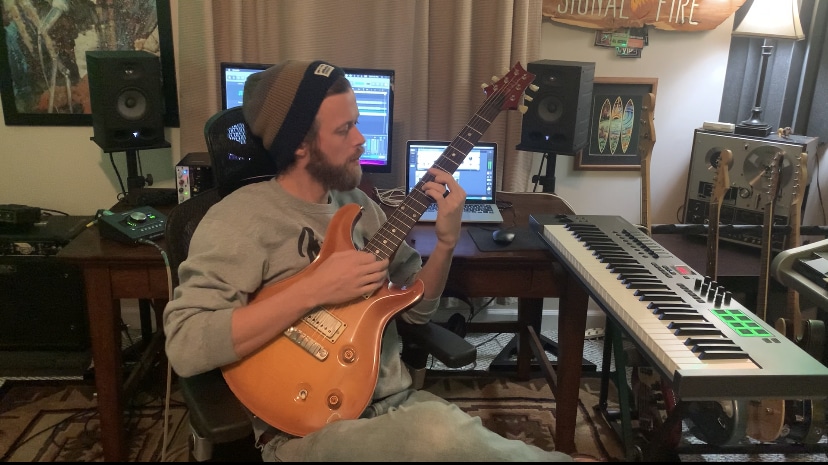 Signal Fire met The Ellameno Beat a few years back while touring in Florida and have remained good friends ever since. “We stayed at Reggie’s house and laid down our track ‘Let’s Move Slow’ in his home studio at the time,” Gregory recalled, adding that on another occasion while the band was passing through Florida, he had visited Froom’s studio to be featured on the Ellameno Beat song, “Last Call“.

About their most recent collaboration, Gregory explained, “I hit up Reggie sometime in December and sent a few riddims his way to check out. Our idea was to start with something bare bones, and build it up together as a true collaborative track. What I sent Reg had no lyrics, just a riddim. He sent me back the hook and lyrics, additional instrumentation, and mixed it as well. He is a super talented producer, musician and vocalist. We knew we had a nice tune.”

Froom added his perspective. “I had a blast creating this one with Sean. We’ve always had a solid creative chemistry over the years,” he said. “After hearing the instrumental demo he originally sent over, I had a ton of ideas right off the bat. It was at a particularly saucy tempo I was stoking on at the time! I proposed the idea of him sending me stems and letting me produce, mix, and kinda just do my thing with it. He was cool with it and gave me free reign!”

Demonstrating his passion for producing, he continued excitedly. “I jumped right in and went crazy on drum sounds. Then tracked a bunch of keys, and guitar stuff to get the rhythm section hitting hard and ready to accompany a flowy chorus.  While I was dialing all that stuff in, I discovered the melody to the chorus. I’d been subconsciously humming it while I was working without even realizing it for about an hour or so. Once I became aware of what was happening, I snatched my iPhone and captured it real quick in a voice memo. Worked it backwards for a bit and found the lyrics and cadence that fit the melody properly. Sent the track back to Sean and at that point, we both knew we had something special.”

According to Gregory, after their initial work on it, the song had sat for a bit. Then, the events of January 6 unfolded, with Trump supporters storming the United States Capitol, and he quickly hit Reggie up. “I was like, ‘Yo, Reggie we gotta finish this tune and get it out, it’s super relevant.’ So, we finished up the verses and production, Reggie put a stellar mix on it and we decided to drop it as quick as we could.” 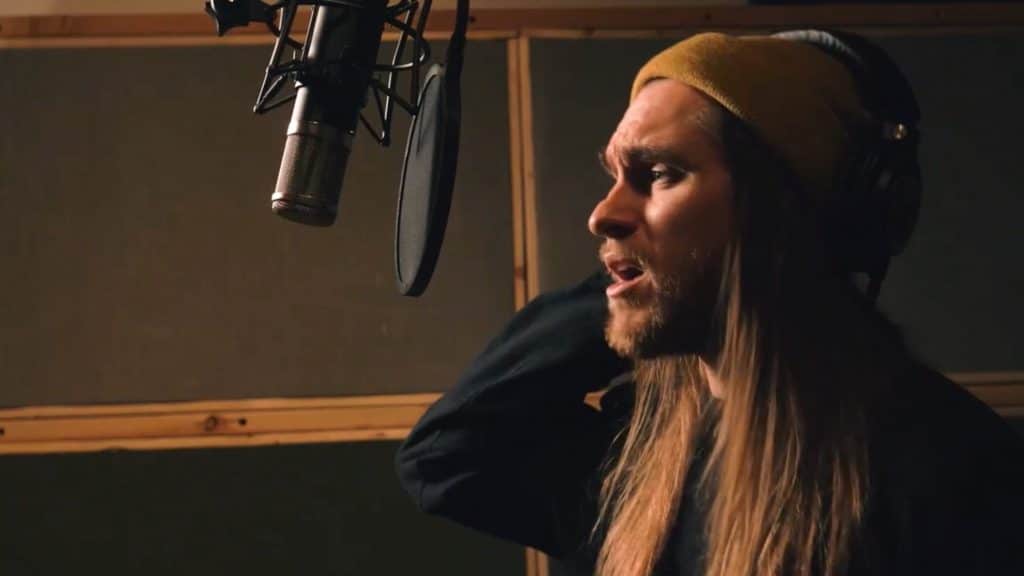 Simply put, “False Reality” is a killer track all around. Its propulsive riddim serves as the perfect vehicle to carry its message of exasperation and outrage, a sentiment shared by many of us at Rootfire and within the reggae community.

Well, all we see is the cracks in the beams

Of the floor that holds up their false reality

Hate crimes are what we see

To me this track is relevant to the times we are living in,” said Gregory. “It seems the truth is hard to find, and so many people are quick to believe the lies. Our media feeds us constant false information, creating a false reality that many people choose to live in.”

Froom conveyed less tempered views. “So, in writing my lyrical contributions to this song, I’m directly voicing my feelings and frustrations about the current state of society after the last four years of madness we’ve all endured.”

“I’d like to be very clear here that my intent is not to make a ‘both sides are at fault’ argument,” he vented. “My statements are aimed directly at particular media sources/personalities, political figures, and citizens of this nation who have chosen to follow the lead of baseless conspiracy theory, and abandon any and all truth that does not serve their own self-interest. This continued normalization of ‘alternative facts’ through gross over-consumption of information from unchecked articles on social media and conspiratorial news outlets such as Fox News & Breitbart has weighed heavily on my psyche lately.”

While Froom’s contempt for the former administration and current political climate fueled his writing, ultimately “the idiotic attempt to overthrow our democracy on January 6, incited by the 45th president of the United States” triggered him to finalize the song.

“After spending a couple days soaking in the horrifying images of thousands of ill-informed (mostly white) people storming the capital with little resistance, and multiple Republican representatives turning around and voting in favor of overturning the 2020 presidential election results that very same evening — Josh Hawley and Ted Cruz (inserts middle finger emojis after each name) — I took to the studio and wrote my verse. It came to me right away.”

Another dynamic element of the song is the how the vigorous tempo downshifts to an enchanting, dreamy bridge, where Froom and Gregory trade layered lines, their disparate vocal styles providing the perfect juxtaposition. Stylistically, this section is reminiscent of the last single The Ellameno Beat released, “Break Through” a modern rocker influenced by Tame Impala, the psychedelic music project of Australian audio auteur Kevin Parker. The bridge not only changes the vibe musically, but lyrically as well by ultimately offering hope for the future:

It’s a selfish game they play

It’s nothing we haven’t seen before

Never thinking about the future

But the fight for power will leave blood upon their hands

Maybe we could learn to love

Start all over again

Reflecting on his motivation for the song, Froom mused, “I can safely say this is by far the angriest I’ve ever been whilst recording any music to date. But, in the same vein, one of the most inspiring experiences I’ve had creating anything thus far. It’s a very special feeling to take a turn and speak out about these serious issues we’re dealing with in these wild times we’re living in.” 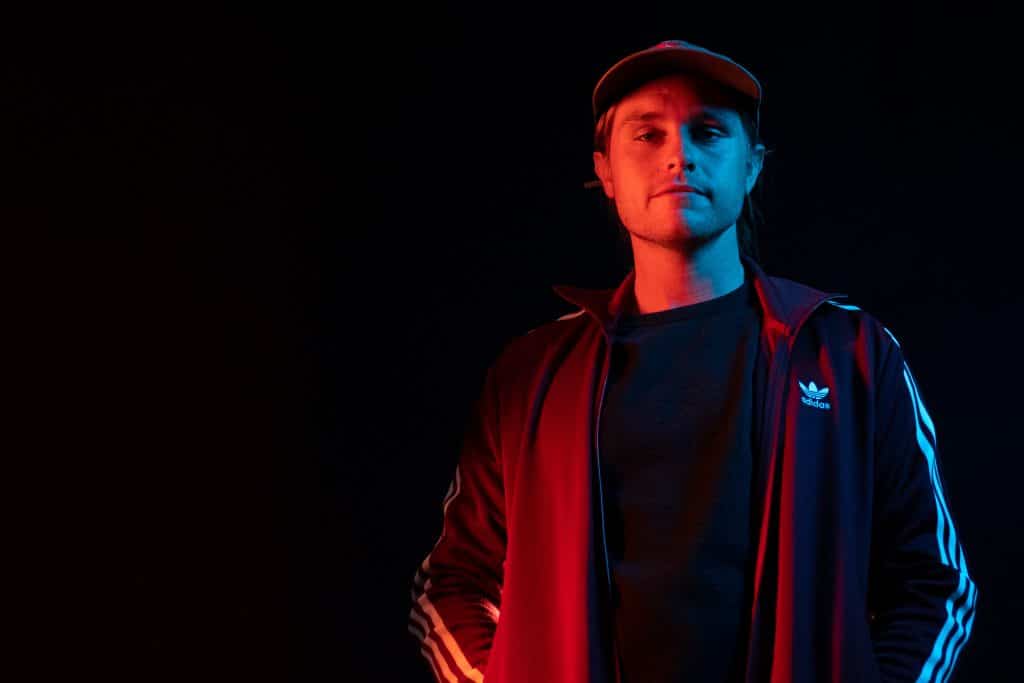