Dub music has a way of showing you a new side of a song you love. The dub engineer can choose to bring out and highlight certain parts that may have been hidden in the original version, to give you a new perspective, and even some insight on what’s happening behind the scenes in the original version. I’ve been loving the new dub remixes coming from Giant Panda Guerilla Dud Squad lately for just this reason, and the latest in this massive series is called ‘Cool It Dub,’ a version of their 2019 single ‘Cool It.’ This version was remixed by Victor Rice, a New York ska-reggae producer and bassist who has worked with some other favorites of mine, including The Slackers. So I was eager to give this one a first listen.

With excited ears, I hit play, bringing me back to when I was a teenager hitting play on their Slow Down album for the first time; and I gotta say, I loved ‘Cool It Dub’ from the second it began. It jumps right into action with a killer horn melody trading back and forth with some slinky organ, all laced with a hint of reverb and echo to let you know the fun is just beginning. As some sticky guitar started plucking in, and the drums built up, I got excited, and my excitement was justified by the groove to follow. Typically in dub, the lead instruments are the drum and bass, and this tune is no exception. Chris O’Brian and James Searl steal the stage from the horns, as a cloud of echo and brass gives way to a pulsating disco-funk beat on the drum and bass. No one blends these styles with reggae nowadays like Panda. And then they give us a moment with James’s masterfully simple yet powerful bassline, which becomes completely one with the drums. The two are like one instrument played by one person with eight limbs. The dub effects keep this tune out in space, and the horn section doesn’t cease to decorate that sturdy backdrop. I love the way the horns dub in and out from the groove, like funky traffic whizzing by, honking melodically.

We only get a hint of the lyrics to chew on while we groove; “The temperature getting hot, we can’t cool it, no, no….”

Ain’t that the truth.. The words echo in my head for the rest of the tune and take on new meanings. And it echoes in again later on…in fact it’s the only lyric Victor gives us in this version, and that’s important to think about. It’s a loaded statement in a way. My mind jumps to fires on the West Coast, record breaking hot temperatures and everything that comes with that. I asked Giant Panda’s Dylan Savage (who sings lead vocals on this one) if the lyric was intended that way. He said, “I wrote ‘Cool it’ a couple years ago with the idea of writing a dance floor riddim in the spirit of tunes like The Meditations ‘Ram Jam Session,’ and Bunny Wailer’s ‘Cool Runnings’ & ‘Ball Room Floor.’ Really just trying to catch that kind of vibe.” These upbeat examples put it in perspective for me, and in the context of the rest of the lyrics in the original version of ‘Cool It,’ the words have a whole other, much lighter meaning. ‘Cool It’ is a fun song for partying and grooving, more about heating up the club than the climate. But, Dylan agreed that Victor’s lyrical choice for this dub was “subtle and framed in a way that feels timely.”

The person dubbing a tune can shape, consciously or unconsciously, the few lyrics or melodies that we do hear, leaving the rest up to mystery, even changing the whole meaning of the song. This all has to do with the process of the one at the controls, in this case Victor Rice. He told me that he starts by getting it to a “conventional mix,” then remixes it in several different ways from which the artist can choose a version. He dubs “in real time,” meaning, in one listen through the song, by fading each instrument in and out as he wants them, while the song plays. The dynamic of the different textures of each instrument and how they interact, when remixed properly, can create moments of musical magic, as musical elements echo in and out of the mix. Victor said, “sometimes it’s premeditated, sometimes it’s pure ‘luck’, my subconscious is in play.” I like how he stripped it down and transformed it into this dub-funk meditation, with some ghostly whispers of the song’s former structure peaking in.

What I really love about this dub is the energy. It’s so happy, yet angry; chill yet militant; upbeat AND laidback; a little old school and a little modern; it makes me wanna dance. The upbeat and funky stuff is something Giant Panda excels in. They have a way with faster tempos that a lot of reggae bands don’t touch. And therefore it’s not just laid back and beach-y the way that people tend to think of reggae, it’s funky and lively. The peak of the funkiness to me is during the organ solo; and I feel like these hints of soul and jazziness reveal the Dub Squad’s true East Coast colors.

‘Cool It Dub’  is an awesome version that really strips the song down to barebones and shows you what’s at its core. It has a militant, in your face groove, and there is always something happening melodically, between the drum n’ bass, hints of locked-in vocal harmonies, and the breakdowns of the sax and organ solos. The deep pocket of this band makes this upbeat track feel somehow slow and easy; but it’s got some weight to it…a good one for a sunny drive. Give Giant Panda Guerilla Dub Squad some love and get this one into your rotation. 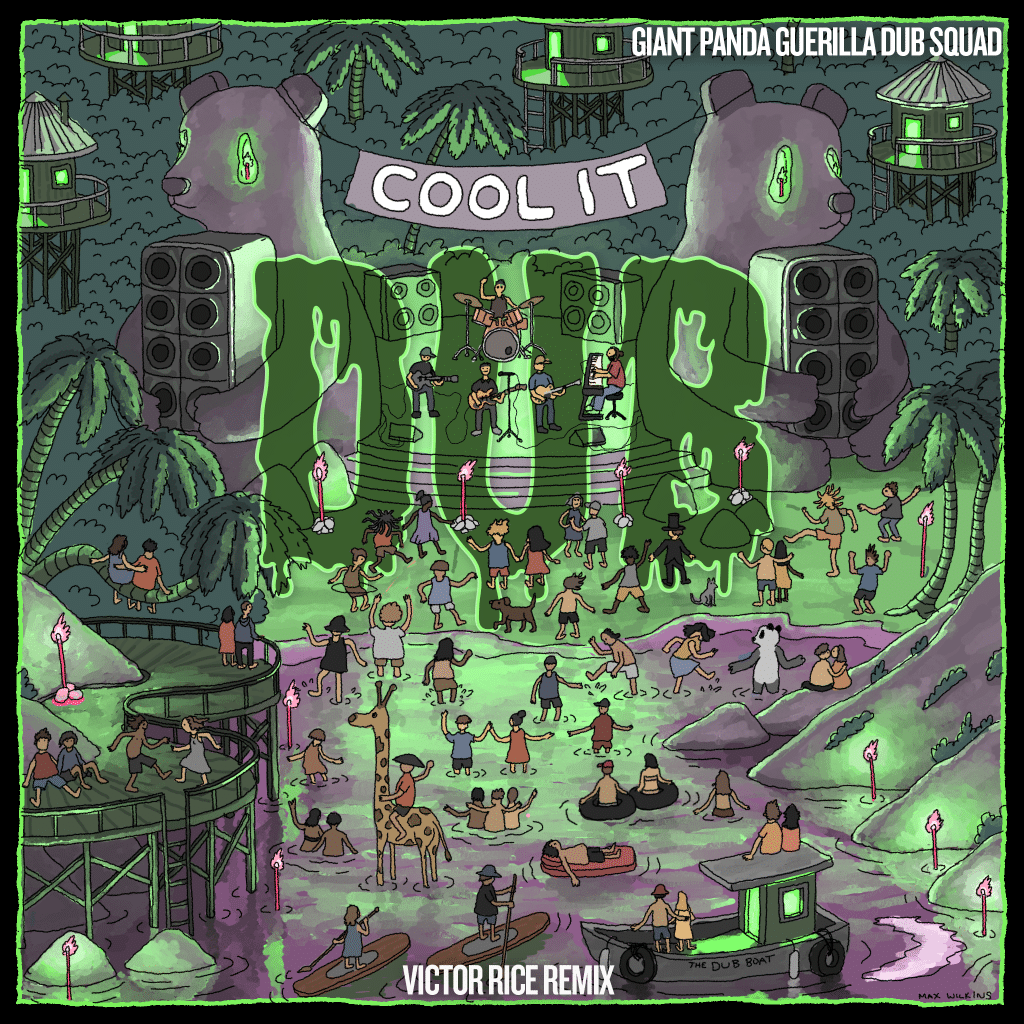