Last week, I sat in a Florida motel room with some of my best friends from Los Angeles’s most revered early-reggae group The Aggrolites. We were talking about some of our shared experiences playing in backing bands for foundational Jamaican artists. We soon came to the realization that the only artist that all of us had in common on our resumes was Pat Kelly, the owner of one of Jamaica’s most beautiful and soulful falsetto voices. Each person in the room lit up the moment his turn came to convey a personal story of his time spent playing and hanging with Pat Kelly.

The next morning I awoke to a text from Aggrolites guitarist Chris Brennan that said, “I think we jinxed Pat!” Immediately I thought, “Uh-oh.”

A 30 second facebook search confirmed my suspicion. Pat Kelly had passed away, almost certainly while we were swapping stories about him the night before.

As is sadly true of most of Jamaica’s greatest artists from the 60s and 70s, Pat Kelly was never a household name for American reggae fans. That was true during his heyday, and even more so today. I would bet real money that you couldn’t find ten audience members at a big Rock/Reggae festival who would recognize his name. Please allow me to pause here, and suggest that you cue up the following playlist as your musical companion to the rest of this tribute to Pat Kelly, as I try to give you a little background as well as some personal thoughts on this pillar of the world’s greatest music.

As I mentioned in my previous tribute to the great deejay Jah Stitch, I don’t like to write biographical material. People have done a far better job than I could ever do at that task, and their writings are all a google search away. But I’ll provide a little history for the unfamiliar. Pat Kelly was born in Kingston in 1949. He was one of the leading vocalists in the rocksteady era (1966-1968). He replaced the almost-mythical icon Slim Smith as leader of The Techniques vocal group in 1966. They scored some huge Jamaican hits with rocksteady versions of songs by The Impressions during this time, most notably “Minstrel & Queen aka Queen Majesty” and “You Don’t Care aka You’ll Want Me Back.” Some personal favorites of mine from Pat’s time with The Techniques are “The Time Has Come” and “What Am I To Do.” Pat went solo in 1968, although he would rejoin The Techniques again soon after, and kept scoring hits up until the late 70s. I have many favorites from this era, but at the top of my list is the original cut of “Talk About Love,” probably because it was my introduction to Pat’s music. Take a listen to it on the playlist above, and see if the lyrics don’t strike you as alarmingly relevant in 2019.

Pat Kelly belonged to that incredible group of Jamaican singers who could really, really sing! So many Jamaican vocalists from the “golden-era” thrived on the strength of their song-writing and the burning passion for their subject matter that was so immediately tangible in their delivery, and thus were able to achieve success despite lacking the technical vocal proficiency that we usually expect in professional singers. This was NOT the case for Pat Kelly. His hauntingly gorgeous falsetto is one of the top pleasures and highest rewards for the music lover who undertakes the deep dive into the sparkling waters of classic Jamaican music. Listening to the rocksteady classic “Little Boy Blue” as I write this, I’ve literally got goosebumps on my arm and shivers down my spine.

In 2006, as part of The Expanders, I had the pleasure of spending a couple of days hanging, rehearsing and performing as part of Pat Kelly’s backing band. Over the next decade The Expanders would back more than a dozen old-school Jamaican artists, but this was our first experience playing with and just being around the creators of this music that was at the very center of our daily lives (we also backed Alton Ellis at this same time, a surreal-experience that I will write about in the future.) I can’t speak for the rest of the guys, but I was nervous. I was 23 years old. I still got butterflies in my stomach just performing at a local bar. Now we had been entrusted by Junor Francis and Eric Kohler, two of the guardians of the Jamaican Musical tradition in Los Angeles, to provide quality backing for Pat Kelly and Alton Ellis. I knew that L.A. ska-rocksteady fans LOVE Pat Kelly, and that most of them at that time had no clue who The Expanders were. The hamsters were running in my brain for sure.

But then we met Pat. Within five minutes my fears were replaced with a great feeling that was a combination of relief, excitement, and joy. This dude was dope! He was a joker. He was just as interested in the hang as he was in getting the performance tight. Our devotion to the sounds of classic Jamaican music was not lost on him, and he was incredibly stoked and encouraging. And though it was exactly 40 years since he first burst onto the scene with that perfect falsetto, he could still sing! At the rehearsal I remember wishing that I could freeze that hour or two and just keep reliving it. As hard as I try, I honestly cannot remember how the show went; all of my memories of Pat from that time were of the two incredible rehearsals we did with him. The picture below is from one of those two days. Pat is directing a harmony rehearsal with a very-young me, Chiquis Lozoya, and Jeff Roffredo, while obscure-early reggae vocalist Scorcher, who was hanging that day, looks on. 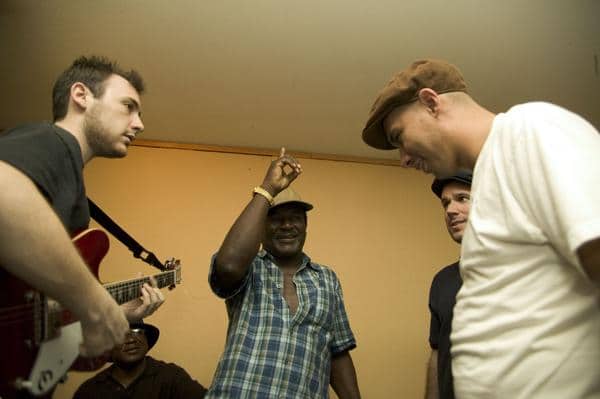 Another favorite memory of mine is of the next time we saw him, two years later in 2008. This time we were in Northern California at the Sierra Nevada World Music Festival, where we were once again backing Pat, as well as Stranger Cole and Roy Shirley (for what would sadly be Roy’s final performance; he passed two weeks later.) I was talking to Pat in the legendary Sierra Nevada rehearsal barn, and I cracked some joke or other. He laughed out loud, and then suddenly he was digging his shoulder into my chest and pushing me around the room! I didn’t really know what was happening, but after about 10 seconds of this he stopped, laughed again, and walked out of the barn for a smoke. I recall standing there thinking, “Did Pat Kelly just haze me?” Like I said, he was a joker.

As I listen to his music today and reflect on all the heroes of reggae music who have moved on to the next phase of existence, I am reminded of something my good friend Roger Rivas always says. There are a handful of foundational Jamaican artists still alive and performing as of this July 2019 writing. Off the top of my head this list includes Stranger Cole, Burning Spear, The Mighty Diamonds, Derrick Morgan, Lee “Scratch” Perry, Bunny Wailer, Judy Mowatt, Marcia Griffiths, Bob Andy, U-Roy, Dennis Alcapone. I’m sure that I have left out a few. Go see them next time they are performing near you! They are not to be taken for granted. It won’t be long before their music will exist as recordings only, and then it will be up to us to keep their works alive. Until then, let’s not wait until an artist passes before giving them the acclaim they deserve a million times over. For now though, please do give a listen to the Pat Kelly playlist we have put together, and allow one of Jamaica’s great voices to transport you to your happy, peaceful place.