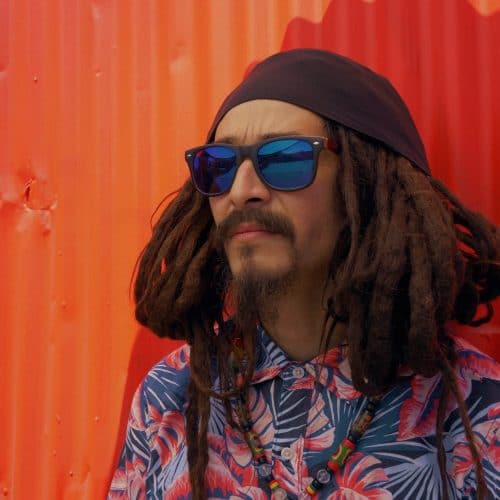 The rich culture that dwells within the Rio Grande valley of northern New Mexico planted foundational musical development for Andres as a young child. Nonetheless, he’s exposure to the music coming from the Caribbean quickly gained a strong hold on the music he was born to play. By age 13, he’d already put together his first reggae group. Within the first two years, they recorded their first album “Dreaming Gaea” in 1997.

Five years later, Dre Z relocated to Albuquerque. While writing and singing with his own group One Foundation, he also co-produced and sang for the Albuquerque based, Mystic Vision. It wasn’t long before both Mystic Vision and One Foundation received “Best Local Reggae Band” by Albuquerque’s weekly entertainment magazine, The Alabi, 5 yeas in a row.

In 2005 Dre Z and Mystic Vision brought legendary reggae artist, Midnite, to the US for one of their first North American tours. As the days strung together while miles of road passed, the two groups began working on what would become the first of two collaboration albums. First, “Current” released in 2006 and after another extensive west coast tour together, “New 1000” was released in 2007. Both reached number one sales for 3 weeks straight on Ernie B reggae. In the same year, Dre Z and Mystic Vision hit the road again with other Virgin Island artists; ARMY and Ancient King as well. This lead to a third collaborative album, this time with Ancient King.

After venturing off as a solo artist, Dre Z worked on a collaboration with Hawaii based, Roots Gwaan, entitled “Sons of the King” with the single featuring Maui’s, Marty Dread. This of course lead to tours across the southwest and west coast in to Hawaii and back in 2011. Three years later they released the single “No Apology (feat. Junior Reid)”.

More self produced music along with collaborative efforts lead up to the 2018 release “In Psalm” with great reception. The album had two Reggaeville video premieres as well strong European sound system interest. After he and Sgt. Remo (from San Antonio) released, “Here We Come Again” in early 2019, Dre Z also released “Rainclouds”, the first single of the upcoming album, “Coming Home”. This is the first time Dre Z has worked with the Barcelona based producer, Go A Chant, producing much of the instrumental riddims. The album features Akea Beka on three tracks and just released summer of 2020.