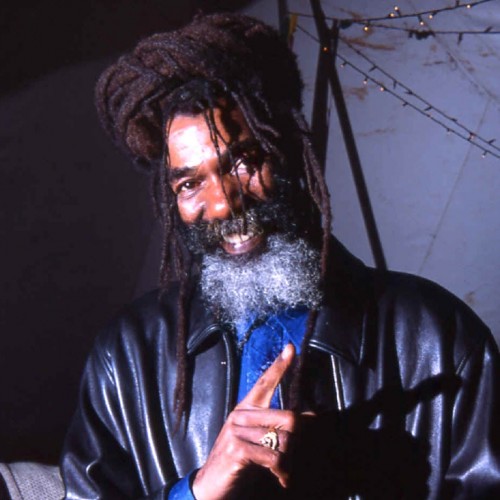 Don Carlos (born Euvin Spencer) Legendary Reggae Artist – Born and raised in one of the most deprived regions of Western Kingston, Jamaica, in a district notoriously known as Waterhouse, which incidentally is also a musical spawning ground for many of Reggae’s greatest ever talents, such as King Tubby, original member of Black Uhuru, The Jays, Junior Reid and King Jammy to name but a few, Don Carlos started his singing career back in 1973, as one of the original members of the aforementioned roots vocal group Black Uhuru. Alongside other founding members, Garth Dennis who later went on to joining the Wailing Souls and Derrick Ducky Simpson Uhuru’s central figure, as part of the trio, Don played a prominent role in the recordings of the highly acclaimed Love Crisis album, for producer Prince Jammy in 1977. The said album was later re-released and re-titled as Black Sounds of Freedom. A year after the trio’s ground breaking debut, Don Carlos surprisingly decided to part company in pursuit of a solo career. Having needed at least three years to get the grips of being a soloist, plus developing a knack for song writing and grooming that distinctive, vocal styling it wasn’t until May 1981 that Carlos really took the fraternity by storm, courtesy of a heavy, roots and culture flavored show case album titled Suffering for Negus Roots.

Since then working alongside Goldie, his side kick, co writer and back up vocalist having built and consolidated a staunch following through touring the live circuit, plus 12 solo albums, most notably Harvest Time, Day to Day Living, Them Never Know a Natty Dread have credentials all three issued in 1982, Spread Out 1982 also otherwise known as Laser Beam to which the majority of tracks in this set have been culled, Never Run Away 1984, Just a Passing Glance 1985 and more recently Seven Days a Week a solid joint production venture, between Goldie, Dr. Dread and himself, there has been no turning back.

Although he reached the peak of his solo career during the heydays of the eighties dance hall mania thus celebrating his impact with five top ten hits between 1982 – 1985, Late Night Blues Nice Time Tonight, Dice Cup, Hog & Goat, I’m Not Getting Crazy and Spread Out The latter of which is included here, he is still churning out solid, melodic roots reggae. There’s an old saying in the music industry that claims: What goes around, comes back around. In Dons’ case a request for reinstatement to his former role as lead vocalist for a rejuvenated Black Uhuru reunion eight years ago resulted in a sadly underrated Now album. Amazingly he has been able to maintain dual roles of solo and group member efforts without inflicting a conflict of interest. It is an extremely rare feat if an artist’s repertorire is built without a few mistakes along the way and up until the reunion of original Uhuru in 1990, Carlos’ reputation suffered slightly from over exposure. During this exhaustive and hectic period, one of Jamaica’s leading producers’ of the 70’s and 80’s Bunny Striker Lee was able to coax some of the singer’s finest moments, which are here by recompiled for this nifty set. By cleverly employing the rugged rhythm section of top sessions musicians like Sly & Robbie, the Roots Radics Band plus Santa and Ranchie, This selection shows just how close producer and artist in perfect harmony got to developing the true potential which Carlos has always shown. The opener, Jonnie Big Mouth is a wistful attempt at reaffirming small time braggerts and so called know all’s of their false impression, over that profound Drifter riddim. While Booming Ball utilises Alton Ellis I’m Just a Guy bass line to good effect. And further merits are handsomely gained as the ever reliable Real Rock riddim encapsulates yet another rendering via Ababa John 1. Among other things this collection is a prime example of versions excursions, so finally but certainly not of the least the album’s singnature tune, Laser Beam utilises that old Three Tops It’s Raining riff to great effect.